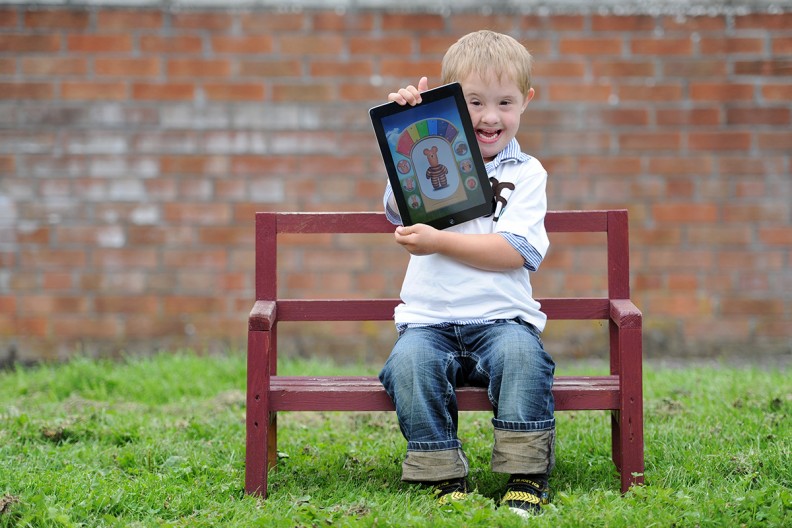 Owen Hicks was the first ever little star of Dwylo’r Enfys. Here his dad, Geoff tells us about the experience.

On the day of filming we were all a little apprehensive as to how Owen would behave for the camera and whether he would be too shy to ‘perform’.

Our episode included a trip to the Cyw studio and some time with Gareth.  Above everything, this was the highlight for Owen and Cyw is still one of his favourite Makaton signs.  We are also grateful that you went out of your way to include Joshua in the episode.  Joshua and Owen are very close and this just added to the family feel of the entire day.

You can imagine how excited we were to be told that Owen’s episode was going to be the premiere of the series.  Who would have thought that Owen would be on prime-time Welsh news to promote it!  Thanks to satellite TV, I think half of England was watching S4C’S Newyddion that night, too!

As for the episode itself, we could not have been more pleased with how it was edited. Other than the cameo appearances of the nervous parents, I couldn’t have asked for a nicer lifetime memory of the day.  I think Owen has watched it over a hundred times now and he’s still not tired of cheering himself.

I also wanted to let you know about the positive effect of the series itself.

Owen’s school, Ysgol Melin Gruffydd in Whitchurch, has been an extremely supportive school from day one.  Owen’s class were scheduled to watch the episode the day after it was aired.  Everybody loved it and began to use simple Makaton. They’d previously experienced Makaton through Owen and his one-to-one, but now they were keen to join in, which to my mind is inclusivity at its best because not only is Owen being mainstreamed into the classroom, but the classroom also understands Owen and his main communication tool.  As a class this culminated in an end of term performance where the whole class performed at least three songs accompanied with the use of Makaton.  You can imagine the teary parents, and not just myself and Annamarie.

It was not just Owen’s class though.  I was surprised to find out in the coming weeks on my journey to and from school that children of all ages were signing ‘Good Morning Owen, my name is…’. I found out that all classes in the school had started watching Dwylo’r Enfys and had started to learn some basic makaton.  The year 5 group had taken this one step further and learnt more about Downs Syndrome itself. After their learning experience Owen received around 10 cards designed by the year 5 group explaining that they had watched the episode and what a star they thought he was.

The school held a mufty day, where each child had the option of paying £1 to come to school out of uniform to mark World Down’s Syndrome day. Not only has the programme raised awareness of Makaton, but also of Down’s Syndrome itself.

As you can imagine, one of the key anxieties of parents to a son with Down’s Syndrome is how he is going to integrate with his peers.  I do think that some of the fabulous progress Owen has made over the past year has been thanks to the way Dwylo’r Enfys has embraced children with additional needs, and raised awareness of communication issues and how these can be overcome with the use of Makaton on a daily basis.

Many of our non-Welsh-speaking friends and family have also watched the series and learnt a great deal from it. And as recent viewing figures have shown, the first episode of Dwylo’r Enfys, which featured Owen, was the second most viewed programme on Clic in 2012, which is a huge feat in itself!

In conclusion, we feel that Dwylo’r Enfys has had an extremely positive effect on our lives and the lives of our friends and family, raising awareness of additional needs, Makaton and indeed the Welsh language.